At Tennisletics, we believe in experiencing things at first hand. So, we sent our Founder, Julie, and her two friends to Florida.

It was a beautiful sunny day in late March when the three-savvy tennis girls from Austin, TX arrived at the new home of the IMG-owned Miami Open - the Hard Rock Stadium and home of the NFL Dolphins. 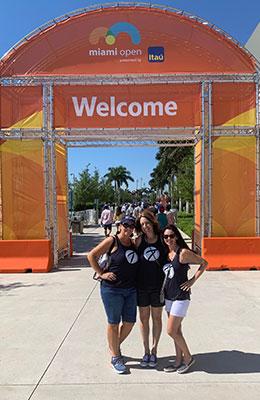 Since 1987, the Miami Open had resided at the picturesque Key Biscayne venue. Unfortunately, the tournament owners had reached an impasse with the Crandon Park landowner, Bruce Matheson, and further expansion of the tournament to meet demand proved impossible. Prolonged lawsuits between interested parties provided further evidence it was time for a change. Billionaire developer, Stephen M. Ross stepped in to re-imagine the event within the Hard Rock Stadium at Miami Gardens, a city north of Miami and keep the event in South Florida. Ross, who bought the Dolphins in 2008, has spent $550 million renovating the stadium and a further $72 million to create a tennis venue.

But the question our crew was eagerly asking themselves was "did the event still work?." Let's break this down. 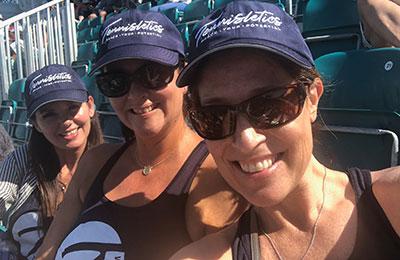 This was a very easy venue to get to with lots of parking available. Our crew used the ride-hailing app, Uber, to get there. Thankfully, there was a designated “ride share” drop off and pick up area, making it super easy. Our crew went in the first week but there were minimal lines for entry and lots of staff to process visitors smoothly. No bags are permitted except clear bags and (thankfully) you are able to take an unopened bottle of water.

First impressions were impressive. The venue was very clean and well signposted. The area outside of the main stadium is relatively small (compared to other tournaments like the US open), so it was easy to navigate and find the court you wanted. Our crew had tickets for the Grandstand and made their way there first. In reality, throughout the day they moved to other courts to soak up some of the high-quality tennis on show. It was great to know that with the move the tournament continued to attract the big names in tennis. Outside of the Stadium court, the feeling on the other courts was very intimate, so you got great views of your favorite players. The Miami Open had a great vibe with 'pumped up' party music playing during the changeover. The energetic crowd got really involved with supporting their chosen player - whether a veteran or “Next Gen” player. Outside of the tennis courts there are some well thought out communal areas for lounging, eating and drinking. The lines were pretty long for some of the food concessions but, given experiences at other tournaments, that is to be expected. The quality of the food surprised us. The crew selected several different 'bites' to eat and each one was delicious - and not the typical event food. So, far so good. The crew stayed on for the “night session” in the Hard Rock Stadium itself.

Unfortunately, this is where things were a bit disappointing. A temporary tennis court was erected on the football field, with half the seats blocked by screens. While they do something similar at other indoor tennis events, the problem here was the court was constructed within a massive football stadium. 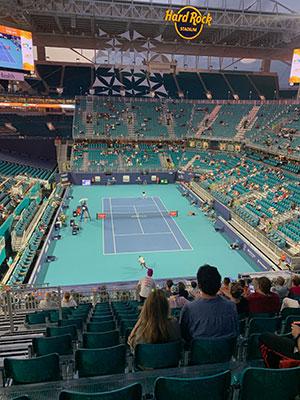 Frankly, our crew felt this 14,000-seat 'center court' was really odd. The temporary structure wrapped around both ends of the court and one side with the permanent existing football seating (and all the amenities) down the other side. Our team felt disconnected from the tennis on the permanent seating yet the raking of the temporary seating was too high. We are hopeful that it can be adjusted for next year.

Overall, given that this is the first year for the Miami Open at the Miami Gardens, the event was successful. Crandon Park was aging and like an old pair of slippers that you've held on to for too long, had to be replaced. The 'new' Miami Open is vibrant and exciting. Unquestionably, our Tennisletics crew would definitely go back - but would just get grounds passes as there was so much to see and do outside of the slightly compromised Stadium court.