How different types of court impact a tennis match

Tennis tournaments across the world are played on a range of different surfaces, each of which has its own characteristics that impact the match in a different way. The four most common types of tennis court are hard courts, clay, grass, and carpet (or synthetic turf). Out of the four Grand Slam events, the US Open and Australian Open are both played on hard courts, Roland Garros (French Open) is played on clay, and Wimbledon is played on grass.

The different courts and surfaces will affect how the game is played meaning players will always have a favored surface. Below we’ve explained how the key characteristics of the four most common tennis courts the impact they have on the game.

Hard court surfaces are the most common tennis courts that you will typically find at your local school, sports center, or tennis club. The courts are made up of a hard base substance, such as concrete or asphalt, which is then covered with an acrylic surface layer. Each hard court can vary massively depending on the various materials used. 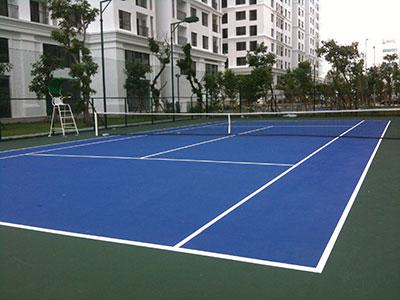 Hard courts are often seen as middle ground as they are typically faster than clay courts but slower than a grass court, meaning players who prefer a fast game will typically perform better when playing on hard court. Additionally, hard courts reduce the number of irregularities in the flight and path of the ball while producing a bounce that is halfway between a clay and grass court.

Traditional hard courts are usually very rigid which can tough on the player's bodies. To counter this, manufacturers have devised new ways to allow greater shock absorption so are less strenuous on the human body. An example is Plexicushion which uses different layers including a special blend of latex, rubber and plastic particles, forms a resilient layer that tries to absorbs body shock and reduces muscle fatigue. The more sand or grit that is used in the coating, the slower the hard court will be.

Clay courts are made of crushed shale, stone or brick and are famously the slowest playing surface. It’s less likely that amateur players will come across clay courts due to the higher level of maintenance and water that is required to keep them in the best condition.

There are two types of clay court - Red clay and Green clay.

Green clay courts are used extensively in tennis centers, alongside hard courts, because they require less maintenance. The Har-Tru green clay courts use metabasalt found in the Blue Ridge Mountains of Virginia, a natural green stone that is extremely hard and angular, so the particles lock together to form a stable playing surface. In fact, Har-Tru is being installed across the USA on top of hard courts as it is easier on the body and reduces the incidence of common tennis injuries to the lower extremities. 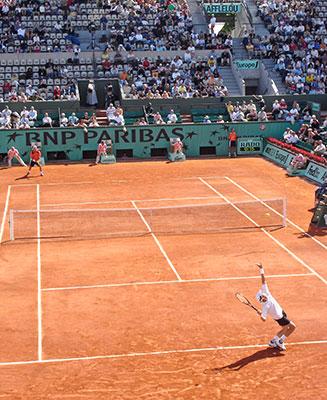 Clay courts are the slowest of all of the surfaces and typically produce a higher bounce in comparison to the other options. Clay in many ways is an equalizer. The games are more tactical like a chess match. Players who rely on their serve to win points will typically struggle as the surface removes many of the advantages of a fast serve. Baseline players and all-court players will usually perform better on clay.

In comparison to hard courts, to most players, clay surfaces are less wearing on the ankle, knee and hip joints as the surface naturally absorbs shock and delivers less traction. The reduction in traction allows layers to slide across the court, a main reason baseline players will typically play better on clay courts whereas players less accustom with the surface may struggle.

Grass courts were originally the most common tennis surface, however, they have become less common due to the high level of maintenance and cost required. Additionally, poor weather conditions have a more adverse effect on in comparison to hard court or clay courts. Grass courts must be cut very short and the dirt must be hard packed and compact. 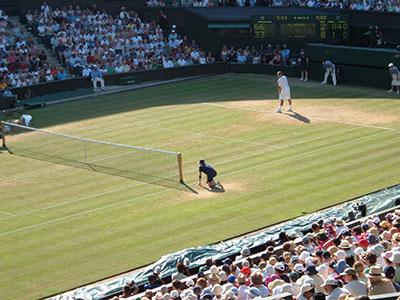 In comparison to clay and hard courts, grass courts are far quicker and have a much lower bounce capacity. Rallies are typically much shorter due to the quicker surface and low bounce meaning players with a who rely on their big serve as a weapon typically benefits on a grass court.

Carpet, synthetic turf courts can be made from a variety of different materials including artificial turf and hard rubber meaning the surface can vary massively between courts. A carpet court can also refer to any removable court covering that is often installed for temporary events but are not used any more for professional events. Typically these courts play faster than hard courts and result in a low bounce. 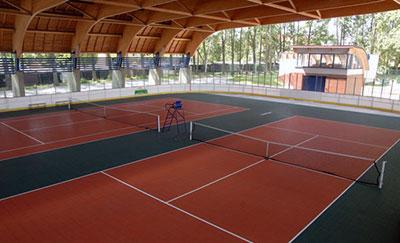 Individuals players will always have a preference when it comes to court type as the different surfaces benefit various playing styles. Rafael Nadal has always been considered the ‘king of clay’ whereas Roger Federer typically prefers a grass court. Obviously, players will always favor one surface but the best players are able to adapt their game to ensure they play to the best of their ability no matter the court. Being able to perform well across all surfaces is something that separates the best from the rest.